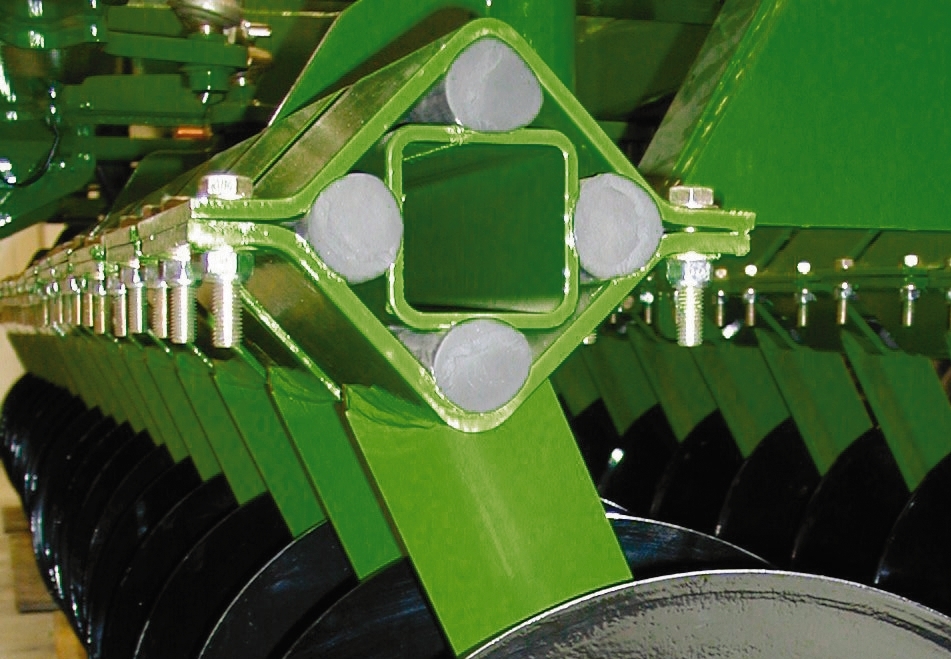 Rubber shock absorbers for disc harrows (rubber dampers) are an integral part of many types of disc harrows from different manufacturers. They are elements for attaching the disc racks to the disk harrow frame.

A disc harrow is a harrow whose cutting edges are a row of concave metal discs, which may be scalloped, set at an oblique angle. It is an agricultural implement that is used to till the soil where crops are to be planted. It is also used to chop up unwanted weeds or crop remainders.

It consists of many carbon steel discs, and sometimes longer-lasting boron discs, which have many varying concavities and disc blade sizes and spacing (the choices of the latter being determined by the final result required in a given soil type) and which are arranged into two sections (“offset disc harrow”) or four sections (“tandem disc harrow”). When viewed from above, the four sections would appear to form an “X” which has been flattened to be wider than it is tall. The discs are also offset so that they are not parallel with the overall direction of the implement. This arrangement ensures that the discs continually cut through whatever soil they are applied to for performance optimization. The concavity of the discs, as well as the angle of displacement, makes them loosen and lift the soil.

If you do not want to lose the quality of soil cultivation during the work of a disk harrow with rubber shock absorbers, you need to choose high-quality rubber shock absorbers for disk harrows. Therefore, it is very important when replacing these rubber elements to find reliable products that are made of rubber, which will have the necessary parameters of the atmosphere and wear resistance.

Our production engineers have developed a special rubber compound, which surpasses in performance the requirements of manufacturers of disc harrows. Therefore, by choosing rubber dampers for disc harrows from a manufacturer who has 30 years of experience in the production of rubber products for agricultural machinery, you will be provided with reliable rubber products that will last a long time and will not require an immediate replacement.

At this moment, we have mastered the production of the following diameters of rubber shock absorbers for disc harrows (length may vary by customer request):

If you are a manufacturer of attachments for agricultural machinery or have a large fleet of disc harrows that require the replacement of rubber shock absorbers, we are ready to consider the production of the required size of this damping element for you.

ask them to the direction manager